Does this sound familiar?

You anxiously waited 9 months for your little bundle of joy, only to find out that 7.6 pounds of pure joy has somehow also exposed uncomfortable feelings like inadequacy, fear,  numbness, and irritability.  You’re drowning in the cycle of helping mom and baby throughout the night, working the next morning on little sleep, rushing home to give mom a break … and then starting the cycle all over again without a break.  Even though you’re head over heels in love with your baby, you miss your old life that included more free time and way less stress and laundry.

Becoming a new parent is a significant transition, regardless of your gender.  With the increased awareness of maternal mental health, some fathers are left feeling ridiculous and weak if they are struggling after baby is born—after all, they rationalize that they didn’t go through pregnancy, labor, and delivery. 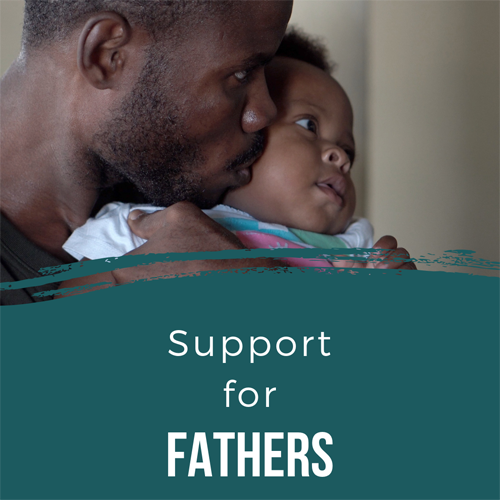 However, the transition to becoming a father is significant, and often not without struggle. Studies show that 1 in 10 men experience depression during the postpartum period, otherwise known as paternal postpartum depression. Keep in mind that due to the stigma of mental health, very few men report their symptoms, so the rate is likely much higher.   If their partner is also experiencing postpartum depression, their chance of developing depression is even higher.  If they watched their wife go through an emergency c-section or experience medical complications, PTSD, depression, or anxiety can follow.

The Birth of a Dad

Just like women, men also experience hormonal changes during and after pregnancy that impact how they parent in the early days… think of it as the birth of a new Dad.

Studies have shown that Dads experience:

Due to the combination of Dad’s hormonal changes and the neurochemical changes that occur in the brain as a result of sleep deprivation and stress, depression and anxiety symptoms are possible.

If Dad is struggling with paternal postpartum depression, it can decrease his involvement with baby.  Studies have shown that even in the earliest stages of life, a father’s involvement with the newborn reduces the risk of illness and helps baby’s social, mental, and educational development.

What is Paternal Postpartum Depression?

Paternal Postpartum Depression may look different in men than it does in women. While men may experience some of the “traditional” symptoms of depression– fatigue and changes in sleep or appetite– they often exhibit fewer outwardly emotional expressions, such as crying.

Why is it important for new dads to seek counseling if they’re struggling?

In short, babies are directly impacted by their parents’ mental health.

If Dad goes to counseling, baby benefits too. One study found that baby responds directly to dad’s increased oxytocin (the love hormone) levels.  While Dad’s increased oxytocin helps him bond with his baby by helping him become more engaged (think silly faces, long gazes, raspberries on the belly, and singing), babies also show a spike in their oxytocin levels to match their dad’s levels. If Dad is struggling with depression, anxiety or PTSD, they’re unlikely to engage with baby as much.

Research has shown that depression in fathers is associated with:

What does it mean to be a good dad?  In generations past, fatherhood meant protection and providing … today, fatherhood means so much more.  As gender roles are changing and overlapping, many dads are finding themselves in multiple roles—and it can be overwhelming.

The Today Show interviewed 2,000 parents and found that about 75% of fathers say being a dad is their most important job, and 61% of dads say they are more involved with their children than their father was with them. In addition to the joy of fatherhood, some dads are experiencing mounting stress as they try to be the best dad they can be. This stress can be exacerbated if they themselves were parented in a less-than-nurturing way.

A crying baby, endless laundry, and your changing identity can expose feelings of inadequacy that you’ve worked so hard to bury. Many men find they’ve spent years succeeding at their job, but with the one job that matters most to them, they feel like a failure.

Counseling can help you untangle all of the conflicting core beliefs you have about yourself to help you be the dad you want to be.

What I want you to know is that you are not alone in this. Many men struggle with the transition to becoming a father…and with research-backed techniques, I can help you not only just cope, but thrive.